The Suffolk County Historical Society was founded in 1886 by a group of forward-looking county residents.

The Civil War had recently ended; the country had just celebrated its Centennial; and Americans were thinking about their heritage and how to preserve it. The founders of the society realized that in a rapidly changing world, if something were not done to record the county's history it would soon be lost. The County Seat of Riverhead was chosen as the logical place to found the new society, and County Surrogate Judge James H. Tuthill became the first President. The society began collecting items almost immediately, and the first displays were placed in a small glass case in Tuthill's Riverhead office.

The society's collection soon outgrew the Judge's office, and in 1893 a small building at the corner of Griffing Avenue and Main Street in Riverhead, which formerly housed the County Clerk's Office, was purchased. The growing collection of documents and artifacts soon outgrew that space too. In the 1920's Mrs. Alice O. Perkins, widow of John Perkins, and a member of one of Riverhead's prominent families, gave a parcel of land facing the Peconic River at the western portal of the village of Riverhead to the society for the erection of a building within five years time, which compelled the construction of the central section of the present museum building in 1930. The East and West wings were added in 1951, through a gift made by Cora Reeves Barnes, and in 1964 the North wing was built, made possible by a gift from Sylvia Staas, in memory of her mother Elizabeth Downs Staas. 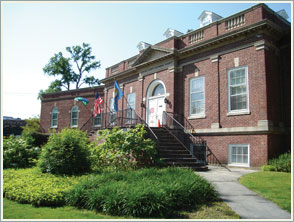 Mrs. Alice O. Perkins donated a parcel of land facing the Peconic River to the society in the 1920s, which compelled construction of the central section of the present museum in 1930.

In 1994 the United States Department of the Interior listed the society's building on the National Register of Historic Places.

Today, over 20,000 historical artifacts are cared for in the museum. Permanent and changing exhibitions are used to interpret important themes in Suffolk County history. The artifact collections are broad in nature and are particularly strong in the areas of General History, Decorative Arts, Fine and Folk Arts, Costumes and Textiles, and Ethnographic and Natural History artifacts.

With few exceptions, these collections have been built through the generosity of generations of Suffolk County residents, who have seen the value of preserving our material culture — and that tradition continues today. Since the society began collecting during the 19th century, when it was the only historical agency in Suffolk County, its core collections have come from all over the county, and many remarkable and unusual artifacts have been donated.

Since its founding, the purpose of the Suffolk County Historical Society has remained essentially the same: to collect, preserve and interpret the ongoing history of Suffolk County and its people. To fulfill these purposes the society operates a history museum, a library and archives, and offers educational programs and events. The society houses a unique, ever-growing collection of artifacts, reflecting more than three centuries of history.